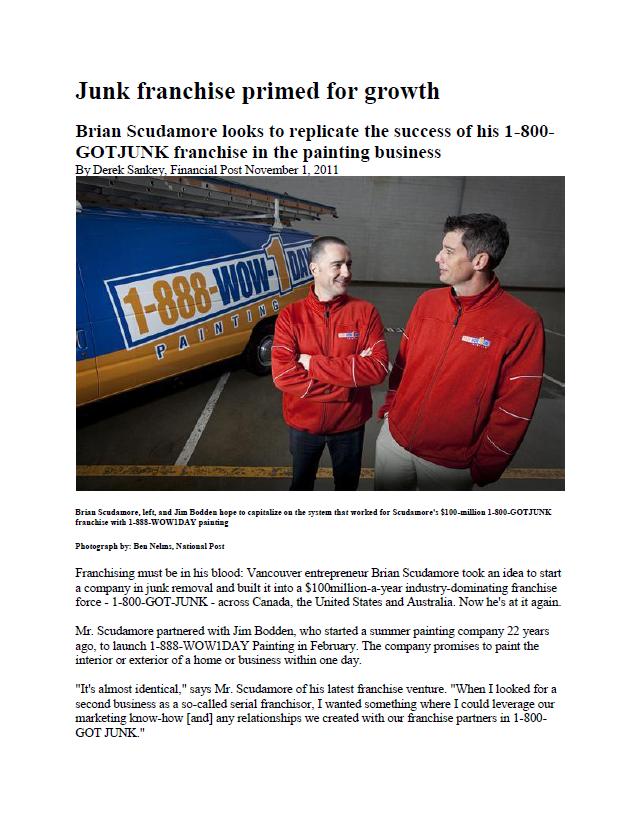 Brian Scudamore, left, and Jim Bodden hope to capitalize on the system that worked for Scudamore’s $100-million 1-800-GOTJUNK franchise with 1-888-WOW1DAY painting
Photograph by: Ben Nelms, National Post
Franchising must be in his blood: Vancouver entrepreneur Brian Scudamore took an idea to start a company in junk removal and built it into a $100million-a-year industry-dominating franchise force – 1-800-GOT-JUNK – across Canada, the United States and Australia. Now he’s at it again.

Mr. Scudamore partnered with Jim Bodden, who started a summer painting company 22 years ago, to launch 1-888-WOW1DAY Painting in February. The company promises to paint the interior or exterior of a home or business within one day.

“It’s almost identical,” says Mr. Scudamore of his latest franchise venture. “When I looked for a second business as a so-called serial franchisor, I wanted something where I could leverage our marketing know-how [and] any relationships we created with our franchise partners in 1-800-GOT JUNK.”

In this partnership, Mr. Bodden brings his expertise and knowledge in the residential painting business, while Mr. Scudamore contributes his experience in franchising.

Many entrepreneurs who launch one franchise try their hand at doing the same thing in another industry and fail miserably, says Peter Thompson, a management consultant with the Plutus Consulting Group in Oakville, Ont.

“Just jumping from one franchise build to another – the product still has to be saleable and profitable,” says Mr. Thompson, who has seen it done successfully several times. Sometimes serial franchisors start their own second ventures, other times they just buy existing systems.

He cites an entrepreneur in southern Ontario, who launched a residential moving company, turned it into a franchise and then started a complimentary landscaping business to market to those customers.

In the fast-food sector, there are plenty examples of large corporate entities that do it all the time. Wellestablished brands such as Montreal-based MTY Food Group Inc., which recently acquired Mr. Sub for $23-million and Koryo Korean BBQ Franchise Corp. for $8-million this summer, to add to its franchises that include Country Style, Yogen Früz and Tiki Ming. Yum Brands Inc. owns KFC, Pizza Hut, Taco Bell and others.

But Mr. Scudamore is building his own group of brands using a system that brought him his first success – step by step. His vision is to turn 1-888-WOW1DAY Painting into an even bigger brand than his junk removal company.

The idea came to him when he needed to paint an older home he had purchased and heard about Mr. Bodden, who after 20 years in the painting industry realized he needed a way to differentiate himself in the market.

In 2008, Mr. Bodden had renamed his business One Day Painting with a guarantee to have all the work completed in a single day – virtually unheard of in a business where any amateur with a little basic knowhow and some essential tools can call themselves a qualified painter. His attempts at franchising “didn’t go so well”; it’s a lot more difficult than people may think, he says. He did the job for Mr. Scudamore and later the two got together for a talk over a beer.

Within a few months, they had worked out a deal to franchise Mr. Bodden’s concept using the 1-800-GOT-JUNK formula. Mr. Bodden retains a minority stake in the business while Mr. Scudamore, who sunk his money and expertise into the newly formed brand, is the majority shareholder.

“I wouldn’t have given up the majority of my business if I didn’t think Brian was capable of – building another $100-million business,” Mr. Bodden says about replicating Mr. Scudamore’s success.

By the end of this year, 1888WOW1DAY Painting will have 15 franchisees signed into territory agreements, and there are plans to have 50 on board by the end of next year. The long-term goal is to have 200 franchisees within five years generating more than $100million a year in revenue.

Mr. Scudamore’s entrepreneurial drive motivates him to hunt for another concept where he thinks his team – and unique franchise formula – can replicate their success. But this formula also carries unique risks, Mr. Thompson says.

“[Serial franchisors] really do have to pick their opportunity and their industry very well because it’s a recipe for disaster if they don’t,” he says. “The franchise is merely the vehicle for an entrepreneur to actually succeed, [but] at the end of the day, the franchise has to be profitable and generate cash flow – so the franchisee can see a return on investment.”

Mr. Scudamore is confident he and his partners are going to “revolutionize the painting industry.” The first copy is always the most expensive, he says, but then you’ve got a template. One of the biggest assets – and risks – is your reputation, he adds. He has the benefit of 1.5 million customers to tap into, but that brings high expectations.

If Richard Branson can do it in travel, entertainment, beverages and so on, then so can he, his thinking goes. “The scary part is that there is a reputation out there,” he says. “We’ve got to deliver on this business and live up to it.”